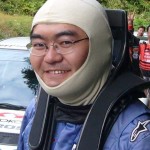 Takumi Takahashi has a lot of experiences in motor sport for over 20 years, has competed in the rally of more than 200 races. Since he debuted in Japanese Rally Championship(JRC) 2-wheel drive class as a Navigator, he has been working with various type of drivers not only on JRC but also WRC, ERC, APRC. In 2006 Seisuke Ohba entered in the series of JRC with Takahashi as a regular navigator.

In 2013, we challenged APRC series on 3 rounds of all 7 rounds, Whangarei, Hokkaido, Malaysia with a driver “Hiroshi Asakura”.