Five Rally Recommend to You

We coordinate for you to do Rallying in Japan. Don’t hesitate to contact us if you have something inquires. 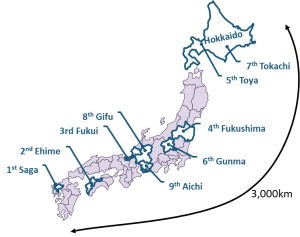 Five Rally Recommend to You

Tsumagoi village is located in Northwestern part of Gunma 150kms Northwest far from Tokyo. Most of roads have been closed during winter season by deep snow.
The competition will take place on a Snow and Ice Rally with the cutting edge of 4WD rally cars.

The most popular tarmac rally all over Japan

Total Special Stage length is not so long but very technical. Drivers are very tired by a lot of corners and no long straight parts. It’s typical Japanese technical tarmac road.
Karatsu has very fresh seafood and Japanese delicious beef.

The gravel Rally in the west of Hokkaido

Stages set to run through the beautiful tourist sights such as Lake Toya, Mt.Usu, Mt. Showa Shinzan and Mt. Yotei.
Toya stages have narrow and high-speed road nearly Rally Hokkaido. There are technical forest roads, and river crossing road passing with a big splash also too.

The gravel Rally in the south of Hokkaido

Rally Hokkaido categorized under JRC (National) and APRC. This is the largest scale rally in JRC series.
Some stages have high-speed road, where the average speed more than 100km/h, long stage over 30kms. Drivers require a lot of patience and physical power to complete the rally.